skip to main | skip to sidebar

An extra game for extra profit? Toss off!

As an English football fan I'm definetely against the Premier League's ludicrous idea of adding an extra game to the fixtures. There are many reasons to suppport the claim of all of us who love English Football.

Now the fans and the clubs must play our part. You have to fight for what is fair. Say no to the Gam£ 39.. Sign the petition to let down this ridiculous plan. 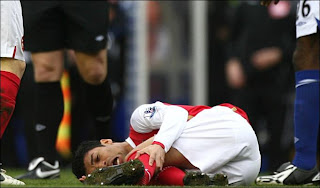 What the hell crossed Taylor's mind at that time?! Was this tackle needed? Definetely not. The way I see it, Martin Taylor must be banned from the turf until Eduardo makes his cameback. I DO agree with Arsene Wegner's statement when he said Taylor should never play football again.

It was such a rash foul that I didn't have the nerve to watch it again. Arsenal players were really astonished at seeing their team mate was to undergo a very serious injury. Adebayor and Hleb seemed to be suffering that in their own flesh. No doubt everyone connected with Arsenal will be supporting the Croatian. Eduardo is ruled out for the rest of the season as he seems to have broken his shin and his fibula.

To round this post off, I'd like to say not only Martin Taylor should be banned for some time but also that Alex McLeish should go to the optician's.. The Scot claimed his player HAD NO INTENTION TO INJURY EDUARDO.. Come on! I wouldn't like to see Martin Taylor willing to hurt..

As I said when I commented on Ronaldo's injury, THE BEST FOR YOU EDUARDO!
Publicado por Walter en 16:36 No hay comentarios:

It was frustating for all footie fans to hear Gazza was involved in trouble again. Last Thursday, he was detained under the Mental Health Act following an incident at a Tyneside hotel.

Reports say that he had caused some disturbances at Newcastle's Malmaison Hotel on Wednesday. So, after leaving that hotel, he checked in at the Hilton Newcastle.
A spokesman from the Hilton claimed he was arrested there because they'd received a phone call from the police asking for man whose name was Paul Gascoigne.

Later that day, Northumbria Police confirmed Gazza had been detained under the Mental Health Act.

After such an incident, don't you think it's high time Gazza got help. His family must be his support otherwise all this will be a dead-end street for Gazza. We all know he drank heavily, took drugs and etc but let's forget about that. Drug or alcohol rehabs are a long steep way. Gazza seems to be stumbling on this way now, that is why he need a hand to go on trudging to the top of the mountain.

Here I've found some extracts from his book that are worth a look.

"If I stay sober, will I turn into a boring person? I was always fun when I was drinking. The only bad bit was afterwards. Now it feels really good to wake up every morning with a clear head and remember where I’ve been."

"I’m an alcoholic. I’m proud to say that. It’s what you have to do. I’m going to AA meetings. Three a week if I can make it. And I have a counsellor I’m going to keep on seeing. I haven’t had a drink now for three months. I’ve been on the wagon before, for even longer periods, but I knew then it wouldn’t last. I hope it will this time. Sheryl says I can stay here with her if I stay sober and sensible. I don’t think I’ll get another chance if I f*** this one up".

"So I’m just taking things easy. Playing with the kids, going to the garden centre, having a quiet meal out. When we have friends or Shel’s relations over they don’t drink while they’re here. It’s a lovely day and the kids are playing in the swimming pool. The garden’s looking lovely. Shel is being nice to me, I’m being nice to her. We’re going to have a barbecue this evening when Sheryl’s dad comes round".

The Best for you Gazza..
Publicado por Walter en 6:53 No hay comentarios:

Is this his end?

Before writing my views on this sad event, I'd like to ask this question.. IS THIS THE END OF RONALDO'S CAREER?

Media in Brazil and in Italy itself say this injury has ruined his career to such length that he's not expected to set a foot as a professional player never again.

After a sour draw at San Siro vs struggling Livorno, AC Milan were expecting the worst. The worst was that the scans revealed Ronaldo had ruptured the tendon of his left knee. Unfortunately, knees have been a drama for the Brazilian. He'd previously injured his right knee in 1999. Then in the year 2000, in his comeback one year later in the Italian Cup final, he injured again. Again, 20 months sidelined while playing at Internazionale.

Little do we know what lies in store for this lad. What is for sure is that Ronaldo is undergoning another operation in Paris with Gerard Saillant,the same surgeon who treated him in 2000 after another injury in his right knee.

All the best Ronaldo.. 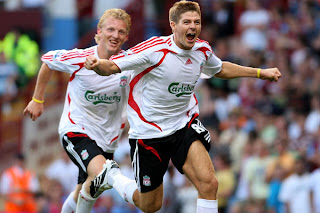 I have to admit it. I was thunderstruck when I read Steven Gerrard was ruling out his own team for the title race. Weird, isnt it? It wont be so curious if you have a look at the table. They are 19 points behind Arsenal and 5 behind Everton, who are the last side currently classifying for the Champions League. So, Gerrard and everyone connected with Liverpool may have thought "We will have to battle with Everton, Aston Villa and Manchester City for a fourth spot and that is".. In a nutshell, lets play safe and focus on the Champions League and the FA Cup and lets put aside the Premier League for another year.

Now my questions surface..What is the reaction of a Liverpool fan after hearing such an statement? Are they happy this way? Are they happy knowing the league dream was put off for another year in February? Wont be so sure honestly.
Liverpool are a big club in world football and seeing this panorama in February must be very disappointing for the fans.

Where are the mistakes? I think Rafa Benitez made some mistakes when it comes to signings. He shouldnt have spent a lot of money on just one player. Fernando Torres is a good value for money but why not strenghing the midfield or defense line. Is Babel what Liverpool needed? I wonder..
I would like to analyse the season of Liverpool in detail now.. lets see..
*They are the second side with less goals conceded..thumbs up for Rafa..
*Their away performances place them 4th.. not so bad Rafa..
*Their home perfomances are faulty. They are 8th in the league. This is the key if you want to battle for the title..
*Their scoring aspect looks a bit weak I am afraid. Only Torres and Gerrard have scored 20 goals out of 40 scored by Liverpool. Where is the rest?
*The defense have done roughly ok since they have kept 15 clean sheets out of 25 games..
Bearing all in mind, Liverpool and its manager should fix many aspects now before the Champions League and the FA Cup are put off for another year..
Publicado por Walter en 8:30 No hay comentarios:

Gooners go five points clear - The key behind this success 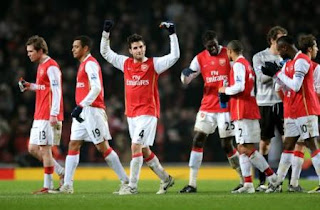 Another convincing win for the Wegner side. Goals from Philippe Senderos and Emmanuel Adebayor earned the North London side another win to place themselves five points clear Manchester United.
As to statistics, with todays goal, Emmanuel Adebayor and Cristiano Ronaldo share the pride of being England top scorers with 19 celebrations each.

Why is it that Arsenal are so comfortable topping the standings?
The way I see it is that Frenchman Arsene Wegner made the right decision at the right time. What is that decision? Begin with the so feared transition. Arsenal needed one (If you are an AC Milan fan, please jot this down, could be useful for you lads) as soon as possible. No more room for Ljunberg or Henry. Behind their backs there were lads eager to make an impact in English football. That was why Wegner bet for the likes of Sagna, Fabregas and Emmanuel Adebayor. All the merit for the Frenchman who proved to be the wisest mind after the departure of Henry to the Nou Camp.

What is next now? Arsenal should keep their head. Five points clear United means nothing. I say just United becasue Chelsea, let alone Liverpool, do not seem to shadow them on the top. Injuries are usually a headache at this stage of the season, especially when the knock-out stages of the Champions League are coming closer. So, the so called rotation policy should be put into practice. Careful! because when I write rotation policy I do not meant changing the whole team line-up. Just a couple of changes to rest players or avoid injuries will be welcomed.

The English Football needs YOU! 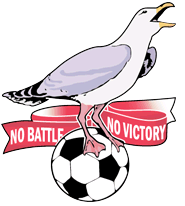 Currently preparing a report on the extintion of Scarborough F.C. ::: To be unveiled soon

Blogs and sites worth a look